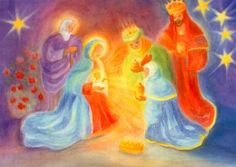 Greetings to all! It has been a while since you last heard from me. It has been a weird couple of weeks, but all is well now. The Holidays are here and we can’t ignore it! This post is a little long, but stay with me! It is going to be lots of fun and I guarantee you will be catching your children doing these exercises outside of “schooltime!”

So let’s talk a bit about how we can bring these festivals to eurythmy. Whether you are celebrating Christmas or Hanukkah or whatever it may be, there is a place for it in eurythmy. The star is a major symbol this time of year. For Christian religion, it represents the birth of the Savior, the light of the world. For the Jewish religion, it represents a shield of protection for King David. Whatever your religion or purpose may be in celebrating this season, find out what the star means to you. It will help you and your children internalize the following exercises.

The Pentagram or Five-pointed Star: This is an exercise taken directly from Leaving Room for the Angels by Reg Down. This exercise is good for grades 2 and up. For those that have moved beyond the 9 year old change, they can walk this while always facing the front of the room, which means they will be walking backwards at some points! This is great for spacial awareness! Start by asking them (the older kids) if they know how to draw a five-pointed star. They will demonstrate it quite well. Then ask if they could walk what they just drew. They will demonstrate it well again. Then ask it they can do it while facing the front of the room the whole time. They may hesitate. Some won’t. This can act as an introduction to form walking in the proper way for these older children (while always facing front). It is best to have 6 children for these exercises, but if you do not, you may want to use a bean bag or something else as a place marker. So take one child up front, or to the center of the room and start by telling this story as Reg does: “Dear children, there was once a star. It was a beautiful star. It lived high up in the heavens with all the other stars. This star, with all his star friends, glittered and shone and played all night. But this one star shone brighter than all the rest. It sent out rays in all directions. It sent out a ray in this direction (with my foot I indicate that the child must open his right leg), and then in this direction (I hold out his left arm), and a ray shone in this direction (I hold out his right arm), and also in this direction (I indicate he must move out his left leg), and finally, to crown everything, it sent [a ray straight up through the top of his head (I straighten the head nice and tall)].” The child is now standing in the pentagram stance. You can hold his arms as you tell the rest of the story so they do not tire.
“One night, when it was very clear, the stars heard voices calling from the earth. All these voices were calling for the star children. Then they turned and began to float gently down to the earth. But our one particular star was in a real hurry and leapt from heaven, and fell, and fell, till he landed, bump, on the earth.” As the star is falling, I gradually lower the child onto the floor, carefully maintaining his star shape and adjusting him so that he is a perfect star. “In fact, he landed so hard, that it quite knocked the wind out of him. He was a little dazed and completely forgot that he had fallen from heaven. But his star friends, who were not quite so silly about jumping down from heaven, found him, and one came and stood at his
head.” (I crook my finger at one child to come and stand at the head – but not too close, or the pentagram will be too small in the end.) “And another star friend stood at this right leg, (I get a child to stand at this right leg) and another came and stood at his left hand, (ditto) another stood at his right hand, (ditto) and another came and
stood at his left leg, (ditto). All his friends now stood in a star shape around the poor little star, and as soon as they did this, he was able to get up on his own two feet.” (I have the child get up and stand at the head position.) “First, he thanked the head star; then he went and thanked the right foot star; then he thanked the left hand star; and he thanked the right
hand star; and he thanked the left foot star, and, lastly, he went back to the head star and thanked him again, because the head star is the one who starts everything.” (While thanking each star friend, I lead the child from place to place so that he moves the pentagram.)

You can then tell the child to move the pentagram without you leading them. Then have one or two more children come and move it. To put your holiday twist on it, have the stars be Christmas stars or Winter Solstice Stars and the children are calling to them from earth to help them celebrate. In subsequent lessons, after they have learned to walk this proficiently, you can have the head star walk to the right leg star, then the right leg star walk to the left arm, etc., in sequence. Another step further is to have them wall moving at the same time. Then you could have only one child moving the pentagram alone from point to point with no other stars. You can make another addition by adding the vowel gestures at each point on the star. Other ideas are having them skip from point to point, or stepping in beat or rhythm to a piece of music. A fun challenge or game to play with the pentagram is to have the children try to get from point to point in 5 steps. Then once you have made it all the way around the star, have them try it in 4 steps, then 3, then 2, then 1! This brings some humor into this exercise and the kids love the challenge! You do not need to tell the story every time you do a lesson. And if the children insist, you can change it up a bit each time. This story and the pentagram has a healing effect on difficult children and especially for boys! This is really fun to tie into the holidays!

The Hexagram or Six-Pointed Star: This form is meant for grades 4 and up. So anyone learning this form will have already gone through the 9 year old change; therefore, they should be walking this form while always facing the front of the room! With this exercise, it will be brought to the children in a similar manner as the pentagram. You start by telling some clever story. I will not give you a story here, but I will help you get started. You could say that each star in heaven is given special jobs, and this little star was given the special job as guardian of the earth. Since this star had 6 points, that meant he could reach a lot of areas other stars couldn’t. He took his job very seriously and every morning before the sun would rise and every evening right after the sun went to bed, he would walk all the paths of the earth. (Then proceed to walk the form of the six-pointed star.) OR to put a holiday twist on it, you could say this six-pointed star was assigned as Santa’s helper and he was given the job of checking on all the children in all the corners of the earth. So he had many paths to take, then proceed to walk the form… or you could say, he checked on all the children in Korea (walk the first line) then he checked on the children in Canada (walk to the next point), etc. Or this star could be the helper of Jack Frost and he had to see which parts of the earth were cold enough for snow… This is just a few examples. Be creative. I would love to hear some of the stories you come up with!

Walking this form is a little different than the pentagram other than the extra point. As you can tell from the picture, there is a “P” and a small circle. The “P” represents people in your audience, or the front of your room. The small circle represents your starting place. So you begin at that circle. You then walk the right side of the first triangle. Then follow the line across to the left, then walk that final line of the first triangle back to your starting place. Then you walk straight down the middle, to the beginning of the second triangle. From there, you follow the line and walk to the left side of the second triangle. Then you walk across the back. Then back to the front of the room to the starting point of the second triangle. This is a complete rotation of the hexagram. You would then walk back up the middle to the starting place of the first triangle and do this over and over to a piece of music. Your music could be ¾ time signature or to the beat of a drum in ¾ time. This means each line of the hexagram in made in 3 steps, bringing the feet together very briefly before stepping to the next point. The feet being brought together represents a bar line in music (only get into that if you are studying that at the time; otherwise, don’t even make mention of a bar line, just bring the feet together very briefly).

Additional versions to this is to have six children at each point and walking to the next point. Another is to have 2 children walking this, each at the starting point of a triangle. Another challenging exercise is to have the children always moving while walking this. Instead of bringing the feet together briefly, have them walk a very small circle around each point and then proceed to the next. If you were to draw out this exercise it would be a very pretty form drawing! Another challenge that we used with the pentagram, is to walk each line in 5 steps, then 4, then 3, etc. They love this one! There are some complicated variations to this form in the book that I will not get into, but I recommend you reading it and giving it a shot!

I hope these two forms will help to bring some holiday spirit into your eurythmy lessons at home or co-op! Form walking is one of my favorite things to do. And the kids I work with are always challenging me to try it “this way.” I love seeing what they can come up with! Merry Christmas and Happy Holidays to you all! Happy Form Walking!!